Tonight is the night! It’s the first year a playoff has decided the teams competing for the college football national championship title. This year, it’s the Ohio State Buckeyes vs. the University of Oregon Ducks. Both schools have championship-worthy teams, and we’re super excited to see a good game. But, instead of game predictions, we’re featuring an inside look at these universities. Learn fun facts, how to get in, and insights from the people who know them best – the students!

Widely known for its bright green uniforms, it all kind of makes sense that the Ducks play in the “Emerald City.” You don’t need to follow a yellow-brick road to get there, though. Eugene, Oregon is home to the University of Oregon, and the school is certainly a reflection of the surrounding town: liberal and politically active.

It’s not easy becoming a Duck. With an acceptance rate of 74 percent, the University of Oregon is considered “selective.” It’s also the academic home to approximately 20,809 undergrads. Thinking about applying? The average freshman high school GPA for UO was 3.58 in 2014. See if this school is right for you with our college match quiz.

What students are saying

Ranking high in sports culture (nine) as well as campus safety (eight),  it’s no surprise to hear things like “school spirit,” “unique people,” “gorgeous campus,” and “small-town feel” to describe life as a UO student. Check out all of our University of Oregon student reviews to learn more.

Did you know that Eugene, OR is also the birthplace of Nike? Yes, the Ducks may be well-known for having state-of-the art uniforms that change with every game, but Nike isn’t involved with just athletics. In fact, Nike co-founders and University of Oregon alums, Phil Knight and Bill Bowerman, donate hundreds of millions (you read that right — MILLIONS) of dollars to the school — including the renovation to the renamed Knight Library as well as the construction of the William W. Knight Law Center.

Ready for the game? Learn some of the school fight songs from these student videos! (Go — Fight — Win, Ducks, Win!) 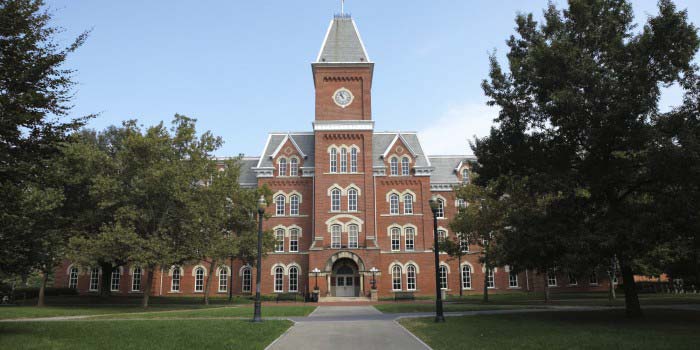 Being the second biggest school in the nation, THE Ohio State University (yes, the definite article is necessary) wants you to know just how great it is. There are thirteen state universities in Ohio, and OSU is proud to stand out as one of the best. Proud and true, a big goal of this Columbus, OH school is to unite athletic passion with a commitment to providing a solid education.

Ohio State is also considered selective when it comes to admissions, but it just may be a bit more selective than the University of Oregon. The Ohio State University has an acceptance rate of 56 percent, and it’s very apparent that students are excited to go (of those accepted, 44 percent enroll). OSU is a much larger school than Oregon, with a total of 43,058 undergrads enrolled — more than double UO’s student body. The average freshman high school GPA for Ohio State is 3.7. Want to know your chances of getting in? Calculate your odds here.

What students are saying

With the success of the football team, it’s no shock to see students rank Ohio State high in sports culture (nine).  But, what else is important to OSU students? Well, don’t be surprised to hear “traditions bring everyone together,” “limitless opportunities,” “unity and pride,” and “enriching classes” as just a few ways to describe the college experience at The Ohio Sate University. Ready for more words of wisdom from the students who know the campus best? Check out all of our student reviews here.

What in the world is a buckeye, anyway? Well, in short, it’s a dark brown nut from Ohio’s official state tree. Even better, it’s also a delicious chocolate-and-peanut-butter treat made to look like the buckeye nut. But, to students of The Ohio State University, they simply like to call him “Brutus.” But, Brutus wasn’t always the school’s beloved mascot. In fact, he didn’t appear until 1965 as an art student’s creation. Before the buckeye was chosen as the official mascot, other options were considered, including a ram, an elk, a moose, and a male deer. Can you imagine cheering on the Ohio State moose? That’s just nuts!

Brutus teaches us how to Dougie. Courtesy of osu.edu.

Be prepared for tonight’s football matchup with these school spirit videos from Ohio State students! (O — H — I — O!)

Have something to say? We want to hear it!

Submit a review of your school, and share the inside scoop on what your campus is all about.