Best Gadgets for a Dorm Room of the Future 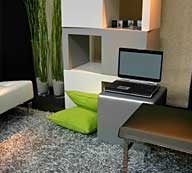 Sweet new dorm room you got there. You must really be digging the bare white walls, bolted windows, and prison furniture. It’s like you’re about to spend a year living in the waiting room of a mental hospital. What’s that you say? Interested in an upgrade? You want to trick out your prescribed domicile so it becomes a state of the art mega-awesome poly-functional pad? A proverbial “Dorm room of the future”? OK then, you’ve come to the right place.

This uber-fancy company creates opulent yet tasteful “sleep systems” for those who want to be ensconced in luxury even while unconscious. But Mobel has outdone themselves with this little number known as the Pause. It’s a ultra modern wooden bed that features an inbuilt iPod dock and discreetly hidden speaker system. You know that play list you’ve got labeled “Sleep” as decoy because you can’t have a play list called “hardcore make-out session.” This is where that play list deserves to be played. When lying on this bed, your head is at the center of a surround-sound symphony. This bed is perfect whether you need to be lulled to sleep, or simply keep the beat into the wee hours.

You know how we’ve all been dreaming of the day our computer mouse would float gracefully a few inches above your desk, in permanent defiance of gravity? The dream is real! The Hover Mouse was designed with gamers in mind as its levitation abilities eliminate imprecise game play due to frictional wear and tear. Fair enough, but it could easily have been invented for a larger target demographic: people who like awesome things. There’s no Excel spreadsheet so boring that it could ever make you forget you are imputing data with a friggin’ anti-gravity mouse! 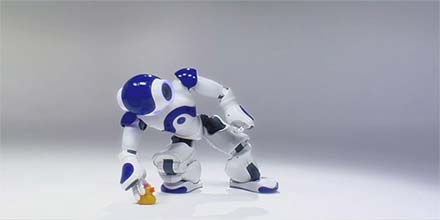 You really want to get futuristic? How about a electronic roommate? You heard me. Flesh and blood co-habitants are hurtling toward obsolescence. My proof: The Nao Robot. This two-foot tall plastic humanoid wonder comes complete with tactile sensors to react and adpat to your touch, eye sensors to detect objects and orient itself in space, and inertial sensors so it can pick itself up should a clumsy human knock it over. Nao has a deep reserve of vocabulary and can carry out simple conversations in exchanges in full sentences with the help of it sonar sensors, microphone and speakers. This little multi-jointed dude struts around in smooth gliding movements which are frankly adorable, and it has the fingered hands capable of clasping and manipulating small objects. It can also do something that your human roommate probably can’t: detect emotion. Nao can recognize and mimic a simple emotional spectrum (likened to that of a child). It does this by recognizing patterns in your voice and registering and adapting to variations in your touch. Also unlike your roommate, Nao has an off-switch.