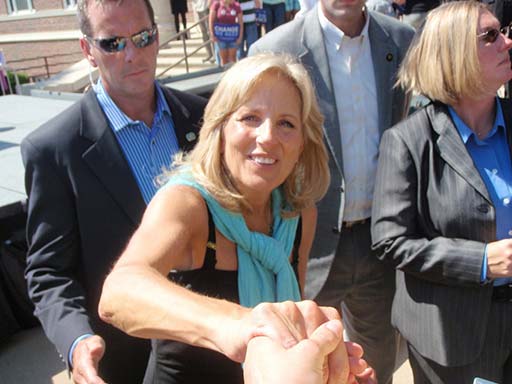 The sun was beating down on the crowd, sweat was trickling down my back and people complained of dehydration—yet, no one let it stop them from waiting for Michelle Obama and Jill Biden to make their appearance. The wives of the democratic presidential candidate and his running mate were visiting Florida A and M University on Saturday, September 27, 2008 to speak to students about the importance of registering to vote. “Students, you must vote, your vote counts,” Dr. James H. Ammons, the president of FAMU expressed to the huge number of students in attendance. Though, it wasn’t just students who were in anticipation in the crowd, the people were of every age, every gender, and of all racial backgrounds. “I’m fired up and ready to go,” Edwina Porter, an older woman exclaimed.

FAMU’s student body president opened the event with some inspirational advice from Martin Luther King Jr., “Keep climbing. If you can’t fly, run. If you can’t run, walk. If you can’t walk, crawl. But by all means, keep moving!” pumping up the crowd. The entire audience portrayed a vibe of passion, chanting “Obama!”

As the wait continued for Obama and Biden’s appearance, one FAMU student, Ashley Strother explained that she “understood that Barack and Joe couldn’t come and was very happy about Michelle and Jill coming” in their place.  A few minutes later, the blue “change” flyers were going crazy; cheers were reverberating throughout the grassy area as Jill Biden walked up the podium to introduce Michelle Obama.

The enthusiasm of the group of Obama fans was overpowering and as Michelle Obama walked onto the stage, I actually got goose bumps—the overall vibe was that incredible. “We are here because of the millions of you who believe,” Obama relayed to the cheering group. She talked about Barack Obama’s stances and her overwhelming support. She said that as they have traveled around the nation, young people have told her that this is the first time they are excited about the election. A woman standing behind me whispered a firm “yep,” nodding in 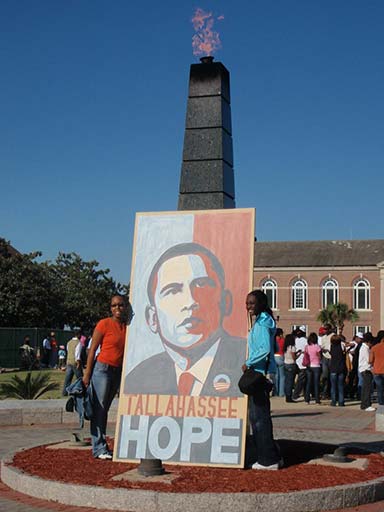 Obama’s news, that 600,000 African Americans in Florida are not registered to vote, erupted a gasp from the taken aback crowd. “If they would have voted, think how differently the past eight years could have been?” Obama asked the crowd, very seriously. Siles Westbrooks, a FAMU sophomore, said that he liked that “she explained the difference that could have been made if there were more voters.” The massive numbers really impacted him. Though, he found her speech “assuring when she talked about the economy.”

As Michelle Obama talked about how she and her husband just finished paying off all of their student loans, one FAMU sophomore, Jecoby Yung, told me “I like her realness. I’m struggling with school right now, and this shows me that she’s just like us. One of my parents is a democrat, the other a republican, [this rally] made me want to vote democrat even more.”

Obama really did make points that the students and many people in the crowd could relate to: money issues, gas prices, and education—or lack thereof due to the latter two. But, “don’t let anybody put limits on your dreams,” Michelle Obama ended her speech with, before walking through the astonished crowd who was jumping over the fountain to be able to shake hands with her.