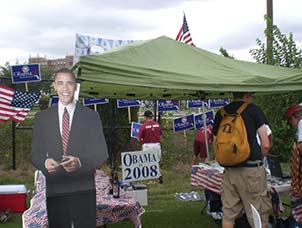 As a college student, the amount of free time is limited due to full course-loads, extracurricular activities, part-time jobs and a variety of other tasks. With a schedule so over-packed it is difficult for the average college student’s attention to be caught by a topic as “boring” as politics. However, the political climate has proven to be very different this year- the presidential election is the most popular topic discussed on campus. A variety of concerns are being discussed among the Florida State student body. Cornelius Troy, President of FSU’s Black Student Union feels one of the biggest national issues to be addressed is, “The clear mishandling of funds and policies. Immigrant polices are being overlooked.” Student organizations are putting in extra hours to contribute to campaign efforts. The College of Republicans Club at FSU currently has a membership of over 1,600 students who are all actively participating in increasing Republican voter registration on campus by raising awareness of conservative issues. Like the Republicans, the FSU Vote Coalition is working to exemplify their mission statement by mobilizing the greatest number of constituents ever before to the polls to make their voices heard. The FSU Democrats student organization is also diligently working to register voters, educating students and other individuals about the significance of this presidential election. Seminole Students for Barack Obama is an official chapter of the Obama for America campaign whose goal is to change American politics by helping elect Barack Obama for President of the United States through various efforts of registering voters, raising funds and spreading Obama’s message of hope, action and change. The aforementioned groups are only a handful of organizations affiliated with Florida State that are dedicated to politics and the presidential election. It is difficult for even the most apathetic FSU students not be politically informed and involved in the midst of what some call the most historic election ever. Currently, FSU clubs hold a variety of events focused on politics from informational meetings, social gatherings and even a formal debate between the FSU Democrats and the College of Republicans. 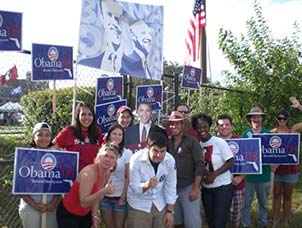 A journalism professor at FSU remarked, “I have never seen such fervor over a presidential election from so many younger individuals. It’s truly inspiring to see America’s youth wanting to become more involved in the political aspect of this nation.” Regardless of the outcome of the presidential election, Florida State University students can be sure that they made quite an impact through the vigorous efforts of so many student organizations.