The Stress of Moving OUT of a College Dorm 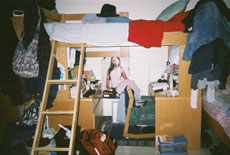 Remember how I wrote about moving into a college dorm last month? Let’s talk about moving out of a college dorm. As you know, we spent an entire day moving my sister into her dorm, and at the time she was getting along great with her roommates. Until there was an inspection. She went to spend the night with some family, and although she had spent half the day cleaning her side of the room, they called her freaking out about about how her side wasn’t clean. She decided that she wasn’t comfortable in the room anymore, so she moved out this morning. P.S. They won the white glove award. Awkward!

Maybe it’s because I’m 21 and she’s 18, but I just don’t see the sense in moving. She’s only going to be there for five months, and she wasn’t being tormented in the least bit. Yes, it’s her dorm too and she has just as much right to be there and be happy as her roommates do, but if this other person was causing all the drama, that person should have been made to leave—not my sister. I think the way this girl went about her issues with my sister was all wrong. Instead of sitting down and talking out her problems, she just declared that she doesn’t like her or her attitude.

My sister had to pay $50 to pack her stuff and move into another dorm. She packed everything, from her Pyrex bowls (that we only bought because her roommate’s casserole dish broke during the moving process) down to her shoes and lip gloss. I have had a lot more experience dealing with people than she has, but I wouldn’t give in and move out. On the other hand, why should she live somewhere she’s not comfortable? Because she’s stronger than that.

Bottom line: remember what you learned about problem-solving skills. If you’re the type of person who likes to be alone when you’re mad and just let it marinate until you’re ready to face the problem, the reality is that you’re not always going to have that luxury. More often then not, you’re going to have to deal with it head on without letting your emotions get in the way. Learn how to do it; it’s a great skill to know how to deal with people and personalities, and it is one that will help you in any situation during college and beyond.