The Typical Week of a USC Undergrad

Ask any USC student what there is to do on the weekend, and you’ll likely be asked this question back:

The blessed gift of going to college in the middle of Los Angeles as a USC undergrad is just that: You’re minutes away from world-renowned entertainment, the West Coast’s hottest clubs, and glamorous Hollywood. 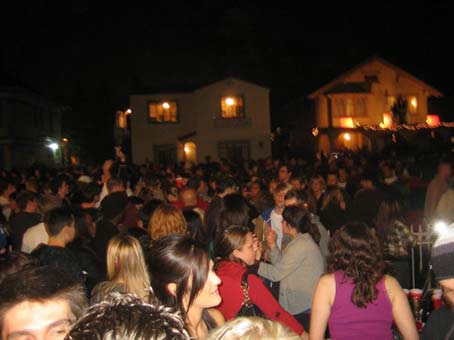 But with this gift comes a dreaded curse – going anywhere in Los Angeles takes about 20 minutes (not including the infamous LA traffic), and getting anywhere requires wheels. It isn’t a pedestrian-friendly city, and besides Metro transportation, you are stuck on campus without access to a car.

However, there are plenty of options for the on-campus weekend warrior (read: freshman). For local entertainment, USC undergrads usually spend their Thursday through Saturday nights at 28th Street – a street packed with fraternity and sorority houses about two blocks away from campus, making up what students call “The Row”. The Row is known to be treacherous territory for males, who find it difficult to get into popular frat parties, but girls generally have access to any frat party, any time. Greek life is prominent in regards to USC’s social calendar – every week, The Row is abuzz about an invite, a date dash, a registered or open party. It’s a verified truth amongst Trojans: There is always something going on at The Row.

Another Trojan tradition is taking a visit to the 901 Club on Figueroa and 28th, known to USC students as “The 9-0”, on one’s 21st birthday. Called “the bar you hate to go to but love to hang out at,” the 9-0 is known for its hole-in-the-wall atmosphere, noisy Thursday club nights and 99-cent draft beers. Many USC undergrad students head to the 9-0 to watch away football games or to simply unwind after class. It’s considered a Trojan rite of passage to visit the 9-0 upon turning the legal age, but students have mixed feelings about the bar in general: To some, it’s a dark, smelly, poorly-lit college pub; to others, a cheap and lively place to “pre-game” before parties on The Row. But most USC undergrads think fondly of the strange habit that is the 9-0 – it’s tradition that keeps students coming.

For those who have cars, friends with cars, or the courage to brave the city’s notoriously “sketchy” Metro bus and train system, Los Angeles truly does open up for an adventurous weekend. LA is known for its neighborhoods, each with a different personality: Find gourmet cafes and shopping in West Hollywood, or “WeHo”; Go club and bar hopping along Hollywood & Vine; Track down a celebrity and follow them through exclusive clubs and restaurants on Sunset Boulevard; Explore a more laid back, eclectic lifestyle along the famous Venice Beach. If you’re in need of a date atmosphere, head over to The Grove – a fairly new square with infinite dining options, popular shops, a movie theater and romantic street lighting topped off with jazz music floating overhead.

By Sunday night, one will easily find that USC offers much of what the typical college campus does – student org-based or Greek-based night life. But what makes weekends for Trojans so distinct is the opportunity to make the most out of the surrounding city, and to absorb the culture that is unique to such a colorful city as Los Angeles. Where behind the wheel or a block from your dorm, USC students are extremely lucky to enjoy the best of both worlds: a rich social life right next door, and a city of unending possibilities just minutes away. 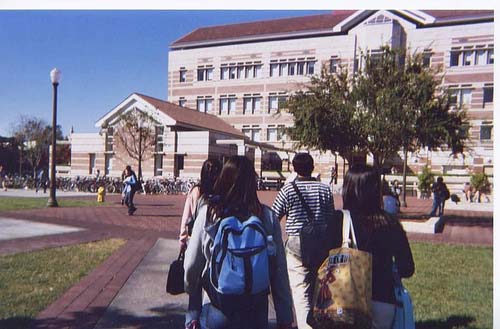 As a USC student, your typical weekday always starts off on your bike – most likely, a beach cruiser – your most trusted form of transportation here in flat-as-paper South Central Los Angeles. You grab your sunglasses, because it’s at least 75 degrees out there – you know that without even looking outside.

Whether you live on or off-campus as a USC undergrad, you know to take caution as you pull up to the crowded intersections; to proceed slowly through the x-shaped diagonal crosswalks and avoid the 70 other cruisers zipping by. You might get heckled at by a colorful local, but you know you’ll definitely get yelled at by DPS, USC’s beloved campus security, for not walking your bike or locking it in the wrong place. You might stop by TroGro (short for Trojan Grounds, one of the USC’s many “SoCal-ese” abbreviations) for some coffee, or brave the crowds of The Lot for a quick Baja Fresh fix before heading to class. You pause to think: Which one of the three-letter abbreviated buildings am I headed to again? VKC, THH, GFS, WPH…

After class, you might meet some friends at “The Hill”, the steps of the bookstore where Trojans love to people-watch between classes. And thank goodness for that not-interested face you’ve perfected, or else you never would’ve made it through the downpour of flyers and “Have you pledged Calpirg?!”’s waiting along Trousdale Parkway.

It’s no wonder why USC students seem bred with Trojan pride in their veins, you muse, as the Trojan Band rehearses the Fight Song at the track stadium in the middle of campus. You bike by young children and their families, all clad in USC gear, waiting outside of the practice stadium for Head Coach Pete Carroll to walk by and sign their footballs – and if you stick around, you might catch a head nod by Uncle Pete himself. But you hurry up and grab some Wahoo’s Fish Tacos at Café 84, or swipe into the famous Parkside buffet, because you’re probably meeting people at Tommy Trojan for a club meeting later that night. 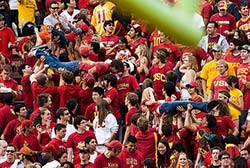 And you know what kind of night awaits you after that meeting. You’re ready to grab some friends and assume your usual position at Leavey Library, USC’s 24-hour study spot, making several trips in and out of TroGro which (thankfully) stays up with you, serving Starbucks and snacks 24-hours a day, too. After a well-fought late night of work and a free ride home from Campus Cruiser, you’re walking back towards your dorm, your head heavy from a full day – and you don’t miss the announcement of the latest upcoming frat party, spelled out in neon tape on the sidewalk. Thursday nights are what you work towards; everyone’s waiting for the usual weekend kickoff on The Row.

But until then, it’s time to take a nap before returning to that paper due tomorrow.

Got an extra time in your weekend? Check out these gigs that are perfect for students!