Break is the time to sleep in, hang out with the friends you don’t see very often, and continue your love affair with instant streaming. This break, entertain yourself AND boost your intelligence with these four television twofers. 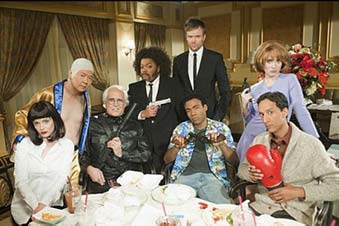 References within a reference! Reference-ception courtesy of whatculture.com.

Pop culture references are so much more than just humorous blurbs, they’re their own language. Whether you’re making it OK to spend a little extra with “treat yo’self,” or expressing your affection for someone by offering to throw your pie for them, references and quotes are an everyday part of communication. “Community” tests your fluency in this pop culture language. From subtle references (seriously, this show can really put the “b” in “subtle”) to entire episodes constructed as homages to popular TV shows or movies, “Community” constantly challenges its viewers to keep up. How pop culturally aware are you? The degree to which you find this show amusing will give you the answer. Seasons one to four available on Hulu.

Gender is something that each of us wake up every day and “do.” We “do” male or we “do” female in the way we choose to dress, the things we say, the way we walk, the way we relate to others. Watching the brilliantly talented biological men on this show “do” female raises the question of what gender actually is, if the boundaries really are so rigid, and gives new meaning to what it means to be a (wo)man. “Drag Race” is like “America’s Next Top Model,” if the contestants could also sew their own wardrobe, dance the house down, and throw some serious shade, in addition to being able to strut the runway. Watch seasons four and five on Hulu.

One of the challenges faced by this show’s creators was to write a central character who was both a murderer with an unquenchable homicidal thirst and a sympathetic character the audience relates to and roots for. They succeeded. Now the challenge is on the viewer to figure out what to make of these contradicting components. Watching “Dexter” makes your brain work overtime to consolidate your sympathy for a serial killer and your ingrained moral stance against murder. You’ll find yourself asking the big questions: “How do I define a ‘bad’ person?” “Is it the action or the intention behind the action that matters more?” “How can Deb drink as much as she does and still be so fit??” (But for real.) The moral ambiguity in this show will make your brain hurt. In the good way. All episodes are available on Netflix. 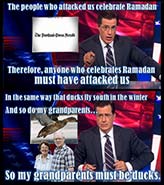 Colbert helping viewers trace their lineage back to ducks. Courtesy of Pinterest.

One of the easiest ways to appear really smart is to stay up on your current events. And, one of the easiest ways to stay informed is by watching “The Colbert Report,” a show as entertaining as it is informative. “That’s crazy talk! Surely I can’t learn about serious events from a show on Comedy Central!” Actually, the comedic element may be what makes it the ultimate news source. Pew research shows that viewers of “The Colbert Report” are better informed of current events than people who get their news from any other source, including TV news, NPR, and other political news shows. Even further, the satirical way the information is delivered trains your brain to recognize when something is straight-up ridiculous, meaning you’ll be less susceptible to wonky logic in all aspects of your life. Recent episodes are available on Hulu.

What are you watching over break to kill the time and train your brain? Share with us on Twitter, and we may feature your response in an upcoming blog post or email!