5 Cheeseburgers That Fry the Competition 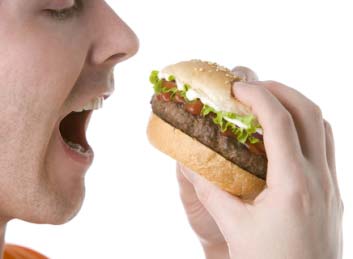 September 18 is one of my favorite days of the year; it’s National Cheeseburger Day. If you’re vegan, by all means, grab a Tofu burger or veggie burger, but this girl will be devouring a juicy, piping hot, slathered in mayonnaise, cheese dripping off the sides, double or triple burger. I’ve tired some pretty weird concoctions in my time, including the Renegade Burger (it comes on a donut!) at Tomahawk’s Sports Bar & Grill near Florida State University and Sloppy Joe’s delicious, lobster-topped Surf & Turf burger, but for this year’s holiday, I wanted to find something truly unique. It really is amazing how many unusual ways there are to serve a burger, but these five are in a league of their own.

When I hear the word ‘douche,’ visions of juicy burgers definitely do not come to mind, but a food truck in New York City has changed that for me. Last year, 666 unveiled its Douche Burger, which is topped with some pretty pricey items, like Kobe beef, foie gras, lobster and truffles (just to name a few), and is covered in gold. The owner of 666, Franz Aliquo, and his girlfriend came up with the idea one night while discussing some of the crazy, overpriced burgers that have appeared on the market lately. Eating a Douche Burger will set you back $666, but you can recoup some of your money if you wash the wrapper, which just happens to be three $100 bills. 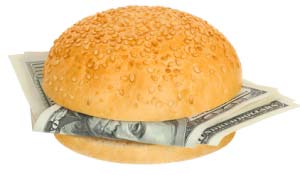 Until August of this year, the Douche Burger also held the title as one of the most expensive burgers in the world, but a lab-grown concoction in London has flipped the burger world on its patty. Created from 20,000 strands of laboratory protein that was cultured from cattle stem cells, the burger costs $330,000 to make, and it was only a single patty! If this is the future of cheeseburgers, I think I’ll become a vegan.

Last year, Minnesota’s Black Bear Casino broke the Guinness record by frying up a 2,014 pound behemoth. The burger was 10 feet in diameter and contained 60 pounds of bacon, 50 pounds of lettuce and onions (each) and 40 pounds of pickles and cheese (each). The patty was so large that they needed a crane to flip it! 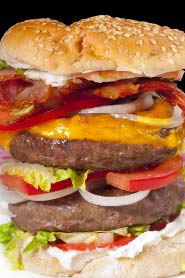 4. Biggest Burger You Can Buy

After years of holding the record for some of the biggest burgers on a restaurant menu, Denny’s Beer Barrel Pub has been toppled by Mallie’s Sports Bar & Grill’s Absolutely Ridiculous Burger. This whopping 134-pound monster sells for $350 and must be ordered a day in advance. Unfortunately, you have to dine in if you plan to try it because Mallie’s won’t deliver it. I guess it’s too hard finding a to-go bag that will withstand all that beef.

After I learned that a Five Guys Bacon Cheeseburger weighs in at around 1,000 calories, I couldn’t get myself to order one ever again (and I loved them!). The same is true for the Monster Thick Burger from Hardee’s; it’s delicious, but at over 1300 calories, I could just feel the fat dripping out of my pores. If your waistline is heaving just thinking about those numbers, just wait until you see how much the fattest burger at a fast food restaurant will add to you dietary intake. The XXXL Fatburger tops the scale between 1,850 and 2,050 calories (depending on your toppings), but what I find humorous is that Fatburger actually advertises that it is made with 100 percent ‘lean’ beef, like that makes me feel any better! Although I may never try any of these burgers, at least they give me some inspiration. Maybe next time I host a barbecue or tailgate party, I’ll try putting out a few unusual toppings, like pineapple and ham (Hawaiian burger) or hot sauce and bleu cheese (Buffalo burger). Heck, I might even try to come up with a dessert burger. You never know, hot fudge and cherries might taste great on a cheeseburger!