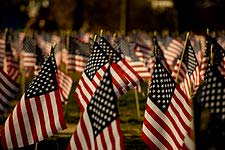 This past weekend marked the tenth anniversary of 9/11, a day most Americans will never forget. While memorial services and events popped up across the country at military bases, in churches and the even during NFL games, many students and professors spent this somber day on campuses across America reflecting upon the events that have reshaped our lives. Here are just a few examples of how college students and colleges remembered 9/11…

Purdue University hosted a dedication ceremony for Freedom Square, now open to students on the south lawn of the Purdue Armory. Freedom Square provides students with a place to gather, celebrate freedom and honor those who gave their lives for our country.

The College of St. Elizabeth presented a patriotic memorial symphony concert, America the Brave, which included musicians from both the Westfield Symphony Orchestra and the New Philharmonic of New Jersey. The concert evoked the multitude of emotions felt by many since that fateful day.

Students at Harper College placed nearly 3,000 American flags around the reflecting pool (one for each person who lost his/her life on 9/11) and listened to music, as well as a poem written by Anne Davidovicz that captured the final moments of a victim trapped on the 99thfloor of the World Trade Center.

The 9/11 Never Forget Project led by the Young America’s Foundation estimated that over 260 college campuses took part in some form of memorial or dedication ceremony this past weekend. Even after Sunday, some colleges, such as Syracuse University, provided a more educational approach to the anniversary by offering panel discussions on how the events of 9/11 have reshaped our view of patriotism and citizenship in the United States today. While many student groups have faced obstacles in hosting memorials on campus for 9/11 in the past, many were pleased to see the restrictions lifted on the tenth anniversary.

Many current undergraduate college students were in elementary school when tragedy struck our nation in 2001; we often wonder how those events may have changed their lives. Do they look at strangers differently? Are they afraid to fly? Or, do they feel uneasy every time the 9/11 anniversary comes around, expecting another tragedy to occur? We invite you to share your memories of 9/11, how it has shaped who you are, and how your college campus paid tribute this past weekend. Although we must all move forward, it is also very important that we never forget.