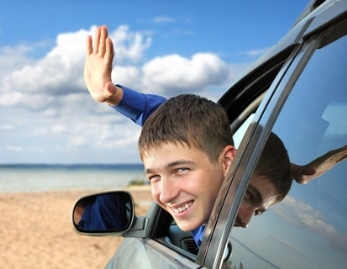 In a few weeks, students and parents will be descending on college campuses across the country. Most students have been eagerly counting down the days until they can move into their dorms, but parents may not be as eager to let them go. How do I know? I have gone through this process twice already and have another child preparing to leave in two years. When my first son left for college, I somehow convinced myself that it would be easy to say goodbye, especially since I still had three others at home. I put on a brave face, helped him unload his belongings and gave him a quick hug. Less than a mile from the campus, I had to pull over because I could no longer see through my tears; I was a complete basket case! My son later confessed that he felt as though I was ‘dumping’ him off and running for my freedom. I felt horrible, but the experience helped me to orchestrate a better send off for my next child. I won’t lie and say that I was able to walk away without any tears, but I was at least able to maintain my composure until we returned home. Here a few tips and tricks I have learned along the way to make letting go a little less painful for everyone.

1. Have ‘The Talk’ Weeks in Advance

Your child will have enough on his plate during move-in day, so don’t burden him with any lectures or serious conversations. It’s better to address your concerns about drinking, sex and money in the weeks before he heads to college. You’ll also want to discuss communication ground rules well before you arrive on campus. Decide how often and what types of communication will work best, so you don’t earn the dubious title of helicopter parent.

I made the fatal error of commenting on the condition of my son’s dorm room his freshman year, so guess what? He wanted to move back home the next semester. He was so accustomed to his own space and all the amenities at home that he never gave the college dormitory a chance. Refrain from inspecting his space for flaws, as well as making any comments (good or bad) about his roommate or other students you may come across. Your child needs the space to make his own judgments about his new place and fellow students without the added pressure of mom’s approval or disapproval.

Watch for subtle clues from your child’s behavior that it may be time to leave. Some may want you to drop and dash, but others may want you to stick around. Resist the urge to explore the campus and introduce yourself to everyone, as this could embarrass your child. Another thing to avoid is overly emotional scenes. If your child is uncomfortable with hugging and crying, do him a huge favor and write your feelings down in a letter. This way, he can read it when things have quieted down and there’s nobody around to tease him about his sobbing mother. It’s also best to leave on a positive note, telling him you love him and are proud of him. Then, gracefully make your exit and wait for him to call you in a day or two.

Most campuses are well-prepared for the inevitable farewell scenes that will play out over the next few weeks. In fact, some even have their own traditions, such as The University of Chicago, which ushers parents off campus with a bagpipe serenade. Emory College of Arts and Sciences even offers some pretty sound advice for parents on how to deal with an empty nest, which helped me considerably. No matter how much you prepare for this change in your family’s dynamic, there are bound to be some rough patches. Just try to remember that your child leaving for college is an accomplishment that should be celebrated and focus on all the positive aspects of this new adventure, like having more ice cream to yourself and not fighting for hot water each morning. Over time, you’ll learn to let go and trust that you have given your child everything he needs to succeed.