Professor Says Plagiarism Is More Complex than We Thought 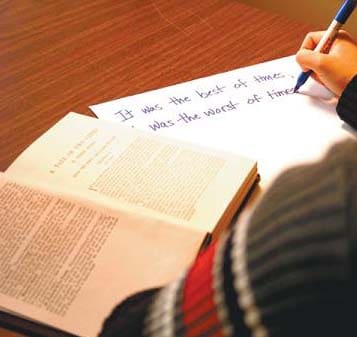 You know the fear: you’ll get caught for plagiarism, even though you didn’t mean to do anything wrong — you just cited incorrectly, or didn’t paraphrase enough. Blum thinks the traditional strategy of blindly punishing students who submit anything with a whiff of copycat is not sufficiently nuanced. In her book, she explores not just the boundary between what does and doesn’t classify as plagiarism, but also why the line is so blurry in the first place.

Blum proposes that part of the confusion stems from Generation Y’s tendency toward collaboration rather than simple information absorption. This shift pops up in areas from the way information is disseminated (largely via social media sites) to class structure at some innovative schools. And, says Blum, plagiarism policies — or, at least, the way educators discuss the concept with their students — should reflect this trend.

“Student norms contrast with official norms not just because of this proliferation of quoting without attribution, but because students question the very possibility of originality. They often reveal profound insights into the nature of creation and demonstrate a considered acceptance of sharing and collaboration,” Blum writes. At the same time, she notes, students are less likely than previous generation to distinguish between formal and informal writing (think of the importance, to students, of instant messages). And rules about attribution are seen as silly.

Plagiarism needs to be redefined in our digital world, and Blum is taking the first step.