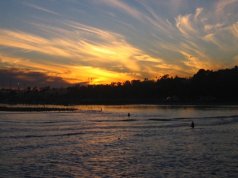 I spent some time looking back on my four years of college. Have I really been a freshman, sophomore, and a junior, and am I really a senior? Did I go through the motions that come with each stage and did I live them?

Freshman year, I crossed the bridge between who I was in high school and who I now am in college. I spent most of my freshman year being careful. Careful not to overwhelm myself, careful not to party too much, careful not to do much. On testing day, I was so nervous and anxious about the whole process that I didn’t do well in the math and reading sections, so I was made to take developmental classes. I don’t think I learned a thing in those classes, although the math class helped me in advanced algebra.

Sophomore year, I joined Women In Leadership Development. I needed something to do and something to force me out of my shell. Yes, I did think I knew everything, at least about college. By then, I had figured out the system. Things like: if I left the house at 10:30, I would still make it to my 11:00 class before the professor; cramming actually does work, but just for one test at a time; memorizing definitions is easier than memorizing dates; the old addage ‘ask and you shall receive’ is true. Junior year was pretty much the same, except senioritis really kicked in. I am a sworn procrastinator, and I realized that I work well under pressure. Probably because I had to do the paper the night before it was due because I put it off till then.

Being a senior is not what I thought it would be. I planned to coast, much like I did in high school. I thought that I would be taking next to nothing and having fun. I’m taking 18 credits (six classes) and I pretty much have the same opinion of school that I’ve had for the past four years. It’s a little scary being a senior, especially in this recession. Seriously, what’s next? Another internship? Graduate school? A job? It’s all a big, red question mark staring down at me. My life is a question mark. Don’t get me wrong, I’m excited to graduate. I applied for graduation last week and I only have one required course left to take. But after that, what’s next? Something tells me I shouldn’t worry, it will all work itself out.