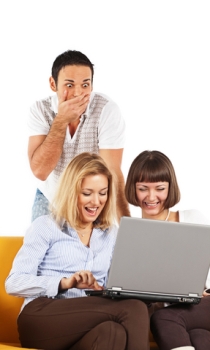 It's April Fool’s Day, which means someone, somewhere on a college campus, has cooked up some elaborate stunt. College pranks have been around for years. Many are centered around college rivalries, while others may be born out of boredom. In any case, there’s a rich history of campus jokes sure to inspire anyone. If you are looking to leave your mark this April Fool’s Day, be sure to check out these infamous college pranks first. 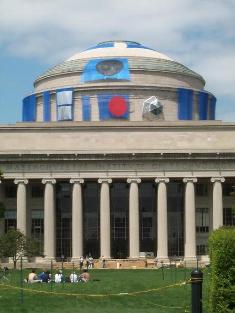 In 1999, a group of MIT students, also known as ‘hackers,’ turned the school’s Great Dome into R2D2. The hack (a term used by MIT students to describe a prank) was completed to celebrate the opening of Star Wars: The Phantom Menace. The students perpetrating the stunt left a box of donuts and a detailed note on how to dismantle the panels without harming the building. The note was addressed to ‘Imperial Drones’ and signed by ‘Rebel Scum.’

If you are a student at Georgia Tech, you definitely know George. Back in 1927, George Burdell (a fictitious student), officially enrolled in school as part of a practical joke. Through the years, George has earned all undergraduate degrees offered at Georgia Tech, been married and even served in the military. In 2001, George led the online poll for Time’s Person of the Year until the magazine removed him from the contest. More recently, George has been listed as a production assistant for the South Park website. Last year, the college even launched a “What Would Burdell Believe’ essay contest with a $500 prize. All incoming students are introduced to George as one of the school’s most celebrated alumni, and there’s even a store in the student center named after him. 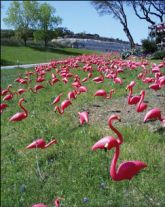 A group of students at the University of Wisconsin in Madison, painstakingly decorated Bascom Hill in 1979 with over 1,000 plastic pink flamingos. The group claiming responsibility for the stunt, the Pail and Shovel Party, was also responsible for another prank that year in which they recreated a life-sized version of the Statue of Liberty and made it appear as though it was sinking into Lake Mendota. The Flamingo prank was so well-received that after much lobbying, Madison made the Lawn Flamingo its official bird in 2009.

While your practical joke or campus prank may not be this elaborate, there are some fairly simple and fun college pranks you can pull on unsuspecting students. Consider buying a bunch of aluminum foil and turning your roommate’s belongings into a chrome wonderland. Not crazy enough? How about letting loose some chickens in the halls or bathrooms of the dorm. Whatever stunt you choose, be sure it’s safe and won’t land you into any trouble with school administrators or the FBI. Just ask those MIT Hackers about Bonsai Kittens and you’ll know what I mean. Of course, if you do pull off something amazing, let us know and be sure to share it on YouTube!