You're Getting Very Sleepy 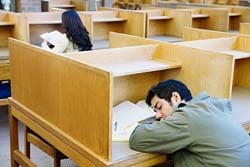 The ability to pull three straight all-nighters and still have enough steam to last through happy hour may be a point of pride among some students, but seriously–when are you guys going to get some sleep? No less than four recently-released scientific studies suggest sleep-deprived college-goers are putting themselves at risk for car accidents, bad grades, and even suicide:

* 17 percent of college drivers said they’d fallen asleep behind the wheel before, and 67 percent have experienced daytime sleepiness while in the driver’s seat.
* Scientists found students suffering from suicidal symptoms were more likely to be insomniacs and experience the poorest sleep quality.
* Researchers in Texas found students who considered themselves morning people had, on average, higher GPAs than night-owls.
* One-third of college students surveyed for a recent study reported needing more than a half-hour to fall asleep at night, and 43 percent said they woke up more than five times during the night.

The remedy is simple–step away from the computer, get comfortable, and close your eyes (U.S. News and World Report has a few shut-eye tips for anyone in need of a refresher course). We promise the books and bars will all still be there when you wake up.