Did you know that Veterans Day was originally celebrated as Armistice Day? When President Wilson proclaimed it a holiday in 1919, it was meant to remember those who gave their lives in World War I (WWI) and to recognize the end of the “war to end all wars.” It wasn’t until May 13, 1938 that November 11 was made a legal holiday that should be dedicated to the cause of world peace and set aside to honor the veterans of WWI. Nearly two decades later, after World War II and the Korean War, the 83rd Congress amended the Act of 1938 by changing the word “Armistice” to “Veterans.”  Today, we celebrate Veterans Day by recognizing all those who have served and honoring those who gave their lives for our country. 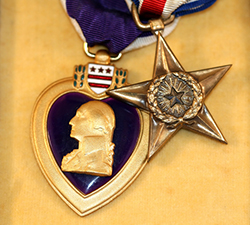 For those who have served (and continue to serve) in our armed forces, one of the most distinguished honors to receive is the Purple Heart. This recognition is bestowed upon service members who are wounded or killed while serving in the U.S. Armed Forces after April 5, 1917. Unlike other medals and recognitions, those who receive the Purple Heart aren’t recommended for the award — they are entitled to it upon meeting certain criteria. Some well-known people have received this distinguished honor, including John F. Kennedy, Colin Powell, and John Kerry. Marine Sgt. Albert L. Ireland holds the record for the most Purple Hearts awarded to an individual with a total of nine. Today, Purple Heart recipients, their spouses, their children, and their grandchildren may be eligible to receive college funding through the Military Order of the Purple Heart (MOPH) Scholarship Program. This competitive scholarship program provides approximately eighty (80) $3,000 scholarship awards annually. Although the awards are non-renewable, recipients may reapply for funding for up to two additional years. To apply for the scholarship program, applicants must meet the following eligibility criteria:

Applicants who are pursuing a second degree or enrolling in a graduate-level program are not eligible to receive funding. All applications are reviewed by the MOPH National Scholarship Committee. Winners are selected based on their academic records, extracurricular activities, community service, letters of recommendation, and the content of their essays. The organization is accepting scholarship applications until January 21, 2015, so be sure to share this opportunity with anyone who may be eligible to apply. For more information, check out our scholarship listing or contact MOPH at [email protected].