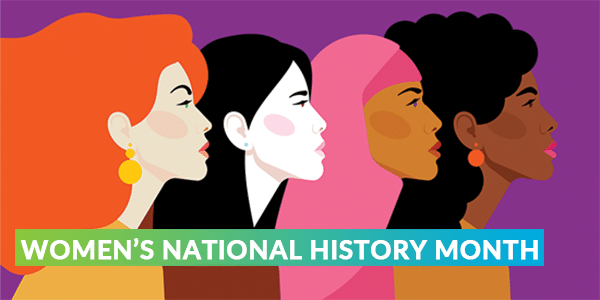 American women earned the right to vote in 1920. This victory took decades of protests and pushes for change and this is part of the celebration of the Women’s History Month.

Now, 102 years later, Kamala Harris holds a seat of political power and in many ways, represents progress. Or does she? The World Economic Forum’s Global Gender Gap Report for 2021 predicts it will take another 135.6 years to close the global gender gap.

One of the reasons they cite is the COVID-19 pandemic and how it impacted women in the workforce. They found that a disproportionate share of women lost their jobs and fewer women were hired into leadership.

What women of today can learn from women’s history month is that making any gains takes hard work and time. To help these efforts and play a pivotal role in progress, we must harness all the strength we can.

Over Ten Women Who Made and Make History

Let’s celebrate many of the women who paved the way for us today, and those who are making inroads for tomorrow in what we call National Women’s History Month.

As we celebrate the Women’s History Month, first is let us know Victoria Woodhull. We tend to think of the first woman to run for President of the United States as Hilary Clinton. In fact, the first woman to go after the country’s highest office was Victoria Woodhull. She was a stockbroker, newspaper publisher, and champion of social reform and ran for the presidency in 1872.

While she did not win, others did follow in her footsteps. Like Shirley Chisholm. In 1972, she became the first African American woman to run for the nomination of a major political party as its candidate for president and much later, Hilary Clinton. This glass ceiling is still in place.

Along with 4 other prominent women’s rights leaders, Elizabeth, and Susan led the mission to secure women’s voting rights. They began in May of 1869 by forming the National Woman Suffrage Association (NWSA).

Another great person that is part of the celebration of Women’s History Month, at great personal risk, Harriet Tubman led hundreds of slaves to freedom along the Underground Railroad. Her mission, which spanned over 10 years, used a secret network of safe houses where runaway slaves could stay on their journey north to freedom. Later, Tubman became a leader in the abolitionist movement. A courageous woman, she was also, during the Civil War, a spy for the federal forces in South Carolina as well as a nurse.

Another famous female scientist, as part of the Women’s History Month, Elizabeth Blackwell was the first woman in America to earn a medical degree. She pioneered the education of women in medicine, opening her own medical college for women.

She was the first woman to be admitted to the British Medical Register, enabling her to practice medicine in the UK as well as in the USA.

The Supreme Court of the United States was set up September 24, 1789. But only in 1981 was a woman appointed as a judge. Sandra Day O’Connor (appointed by Ronald Reagan), served until 2006. To pay honor to all she accomplished, President Barack Obama awarded Justice O’Connor with the nation’s highest civilian honor, the Presidential Medal of Freedom, on August 12, 2009.

Apart from her prowess on the soccer field, Megan Rapinoe put up a fight to close the wage gap. In 2019, she and her teammates and her teammates on the U.S. women’s national soccer team filed a lawsuit over equal pay. She was not the first to spot pay inequality though. A key player was Lily Ledbetter. Thanks to the Lilly Ledbetter Fair Pay Act, an employee may be able to file suit should they realize they have been receiving discriminatory wages based on gender or race. On January 29, 2009, President Obama signed this as his first piece of legislation.

Justice Ginsburg was the first female professor at Columbia to earn tenure. She got to this point in her career after facing (and fighting against) discrimination against women in the workplace. Ginsburg also directed the Women’s Rights Project of the American Civil Liberties Union during the 1970s which was very influential. In this position, she led the fight against gender discrimination (really any discrimination) and successfully argued six landmark cases before the U.S. Supreme Court. In 1980, Ginsburg accepted Jimmy Carter’s appointment to the U.S. Court of Appeals for the District of Columbia and served on the court for thirteen years until 1993. This was the year Bill Clinton nominated her to the Supreme Court of the United States.

Last but not the least person as part of the National Women’s History Month, no list about important women is complete without a big nod to our current vice president. Kamala Harris literally made history on January 20, 2021 when she was sworn in as the 49th U.S. vice president. This made her not only the first woman, but also, the first Black American and the first Asian American to occupy the office. Quite a role model for today’s young women who aspire to break into male-dominated careers too.

Continue to celebrate International Women’s Day and National Women’s History Month by searching for scholarships that pay tribute to other successful women through time and across industries.