College Sports for the Casual Athlete

Even college students must remember to find balance in their lives. If you spend every waking moment hitting the books, you may become overwhelmed and stressed out. College campuses offer many opportunities for just letting loose and having some fun. For those who played sports in high school (and even for those who didn’t!), there’s no need to hang up your cleats just yet. You don’t have to win a scholarship, or even be a first-string athlete, to get in on the action with campus sports.

College intramural sports are typically available to students at all levels of athletic ability and include both team and individual sports on campus. So whether you love throwing around a football, or prefer to hit the courts, take a quick look at what some colleges offer students for free or for a very minimal fee.

Flag Football. This fast and furious sport combines the thrills of football without heavy equipment and full-body tackles. Players must remove a flag (or belt) to end a down. There are several variations of intramural flag football with anywhere from 4- to 9-player teams, and optional point assessments. The sport is so popular that CBS College Sports and PowerAde® actually host an annual collegiate championship for flag football. It’s a great way to get together with your best friends and just let loose for a few hours. 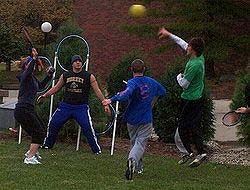 Yes, this is the sport made famous by the Harry Potter books and movies! The sport began to pop up on college campuses in 2003. Today, there are more than 200 colleges with teams participating in the sport. There’s even a formal ruling body, the Intercollegiate Quidditch Association, which was founded in 2007. The game has rules that are very similar to the rules in the books and movies, except that students remain on the ground with their broomsticks, and dragons are rarely seen.

Dodgeball. Remember the good old days of elementary school and P.E. classes? Well, here’s your chance to step back in time. Just like the game from your childhood, college dodgeball is simple and fun. The rules are basically the same as they are on elementary school playgrounds, although getting hit in the face stings a bit more at this level. The sport is so popular that there are several tournaments between colleges and even leagues available for those who want to play on a more competitive level. 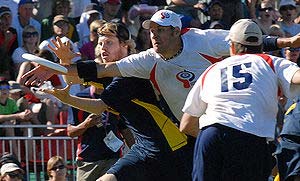 The game, which began in 1968, has a multitude of variations, but the concept is pretty simple; no running with the Frisbee (you can only take one step once after a catch), and you must pass it to another player in the opponent’s end zone to score. Tournaments abound throughout the United States and abroad.

Of course, colleges often offer intramural opportunities for the usual games of tennis, basketball and soccer as well. Whatever your skill set or level of interest, there’s bound to be a pick-up game or a college league available on your campus. Intramural sports not only offer students a way to stay active, but also give students opportunities to meet new friends and work off some stress. So get off the bench and get into the game!