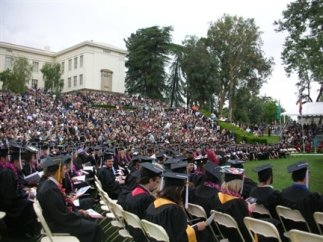 Graduating from college is the culmination of your entire education. The whole thing goes back centuries: Socrates believed knowledge was the goal of life, and a group called the Sophists, the educated and educators, were the most respected in Roman society next to the monarchy. In today’s world, it seems that one can’t do anything without a college degree, and it’s steadily becoming a master’s degree. There is a program in New Jersey called NJ STARS where if you go to high school in New Jersey and graduate in the top 15 percent of your class the state will pay for the tuition and fees at any community college in the state. That means that upon graduation, you will have little to no debt. But that seems to be the snag nowadays: graduation. The percentage of people graduating in four years is getting slimmer and slimmer by graduating class. At Georgian Court, I know someone who kept hitting wall after wall up to two days before graduation and it came down to a near-death situation with the registrar. At GCU, when you don’t graduate on time you get the lovely label of being a “Super Senior,” meanwhile watching your friends and fellow classmates get excited over caps and gowns, senior portraits and their coveted, hard-earned degree, wondering why you’re not celebrating with them.

CNN/Money reported that only 37 percent of freshmen entering four-year degree programs graduate on time while 26 percent take five to six years and 37 percent take more than six years or don’t get their degrees at all. The author of the Education Trust’s report, “A Matter of Degrees: Improving Graduation Rates in Four-Year Colleges and Universities”, says “it’s atypical to get a degree in four years.” Personally, I find that quote really strange. I guess now I’ll have something to be doubly proud of: the fact that I graduate at all and the fact that I’ll have done it in four years (I just thought it was normal to graduate in four years). I even know two people who did it in three years, one at Georgian Court and one at Stockton College. Last year, Boston University boasted an early graduation rate of 7.8 percent.

The biggest thing that I have seen go wrong is that students don’t pay attention to the asterisks and prerequisites on their progress charts. Those are the types of things will really trip you up, especially if your college only offers the first half of a required class in the fall and the second half in the spring. Some departments are so small that they don’t offer every class every semester, and if you don’t grab at it when the class is offered, you’re out of luck and you have to wait until next time. Just keep in mind that it’s your advisor’s job to help make sure you graduate on time—if you don’t, they haven’t done their job.

Students drop out and switch schools too quickly. Granted, there are extenuating circumstances for many and there has been more than one occasion when I have seriously thought about switching to another college, but I stuck with it. Switching schools can not only raise your debt, but it can also slows down your path toward graduation. I have seen too many people transfer into a university from a community college that they did a year at because it was cheap and ended up two years behind their original plan. You’re risking losing some of the credits that you took at the college you started out at and having to take the equivalency at the new college. My advice: give the place at least a year; you just might like it and if you’re starting out at a community college, get your associate’s there and then get your bachelor’s at a university/college.