When many students think about Greek life, they may usually think, “Doesn’t that cost a lot of money?” Although there are financial costs to going Greek, it can also help with your student finances. Sound crazy? Hear me out. I’m an alumna of Alpha Chi Omega, and I, too, was concerned at first about the costs associated with being a member of a sorority. In my case, I lived in the dorms my freshman year and in the sorority house my sophomore through senior years. During my last three years, my bills were actually cheaper than some of my friends living on their own. Rent, meals, water, heat, garbage, cable, Internet…everything is included in one bill every term when you live in the chapter house. Living on your own typically means you have to pay a separate bill for each expense. If you’re still unsure how living in a chapter house can be less expensive, let me break it down.

The cost of living may fluctuate each year based on the total number of live-ins, similar to how your rent can fluctuate based on the number of roommates you have. So, if more members lived in the house, the bill amount was lower. As Oregon State is on the quarter system, I paid one bill every three months instead of a handful of bills every single month: approximately $2,100 every term, equaling about $700 per month, all inclusive. But, depending on how you liked to manage your money, there was also an option to go on a payment plan. This plan broke up the one large bill into three smaller ones paid monthly. Doesn’t sound too bad, does it? Comparatively, a friend of mine lived off campus and was paying $550 for rent, $60-75 in utilities, and $200-250 for groceries and meals-out monthly. That totals to $810 — $875 a month to live in an off-campus apartment or house, and that’s in addition to membership fees for the sorority. Living in the chapter house saved me more than $100 each month! 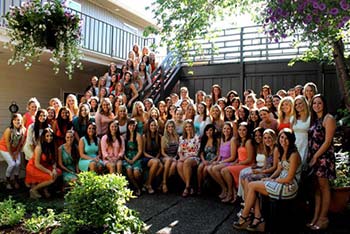 Now, with that being said, joining a sorority or fraternity isn’t necessarily cheap. You still need to consider the additional membership fees if you live outside of the chapter house, which is common during freshman and senior years. If you’re thinking about going Greek, be sure to  consider all costs before you fully commit. And, just like how you research tuition costs, don’t forget to calculate in scholarship money! Similar to how awards can help you pay for school, scholarships specific to a chapter can also help you pay membership fees. For example, my chapter of A Chi O has a scholarship for seniors; every senior receives a sum of money that goes toward her membership fee every term. For some of my sorority sisters living on their own, this scholarship took off their fee entirely! Foundation scholarships for members in need of financial help are also available for just about every Greek chapter in the nation. And these aren’t the only two types of scholarships available. So, make sure you do your homework, look for scholarships, and maybe even find some ways to stop that burning hole in your pocket! For me, there were many reasons I initially wanted to go Greek. I knew that by joining I would make life-long friends, have the opportunity to give back to the community, and be a part of a network of some truly amazing ladies. After doing some research, I also discovered that joining actually helped me budget and save money, too. So, if you are like I was and unsure about being able to afford joining a sorority (or fraternity), get all the details on what it costs before making your decision. You never know, it may work out to save you some money!