Greek Life: The Seriousness of Hazing

Alright, y’all! We’ve discussed a lot of important Greek life topics: philanthropy, academics, what to expect during recruitment, and more; now it’s time to address a very serious one. It’s time to talk about hazing.

Hazing is definitely a popular scene in movies and on TV. It consists of older Greek members humiliating, teasing, physically or emotionally hurting, and ridiculing their new pledge classes. It’s true that many people have experienced this type of hazing, and there are probably personal stories to prove it. But, don’t think that all Greeks haze their brothers or sisters! It is seen as a major “no-no” in the Greek community, and if word gets to the National Council about potential hazing activities taking place, then serious action will follow suit. Chapters have been shut down due to outstanding evidence of hazing (per the zero tolerance policy on a national and campus level). Many chapters require members to sign non-hazing agreements upon joining as well as every year while in college. Below is Alpha Chi Omega’s anti-hazing statement: “Alpha Chi Omega does not condone unkind, undignified, or humiliating activities.  Members of Alpha Chi Omega shall not conduct hazing activities.  Chapters of Alpha Chi Omega must include in their bylaws a statement prohibiting hazing and/or demeaning activities. I, the undersigned, attest to the fact that the above position on hazing/humiliating activities has been read.  I understand that absolutely no hazing/humiliating activities are to occur at any time.  Violation of this contract could result in disciplinary action of my chapter and/or individual members by National Council.” This statement is only one of many that fall under the hazing category. The fact that Greek organizations have very strict rules against hazing means that the parameters for what is considered hazing and what isn’t are very small.  In other words, activities that may be considered hazing in today’s world (speaking as a sorority member, as I’m not as familiar with the behavior in a fraternity) may seem more like “menial tasks,” quoted from this year’s Miss America, Kira Kazantsev, during her interview addressing personal hazing allegations. Even though no physical, mental, or emotional abuse, humiliation, or ridiculing takes place, there may be tasks that could single out a specific class, involve “a few sleepless nights [or] crafting,” (according to Miss America) or a variety of other things and, thus, are considered hazing. You know what my sorority considers hazing? Freshmen study tables! Who would’ve thought, right? I mean, it’s not like older members scream at the freshmen to study faster or harder, or ridicule them because they couldn’t remember the answer to a question: “You got that question WRONG?!!! OMG, if you get it wrong again you won’t be an A Chi O anymore!” No, that never happened. What we did was require our freshmen to study at the chapter house a few times a week. That’s it. Little did we know that it was considered hazing by our chapter advisors and National Council because only one class was required to document a certain number of study hours. This just goes to show how serious the National Council takes the issue of hazing. No one should be singled out; and so, sophomores were required to study, too. 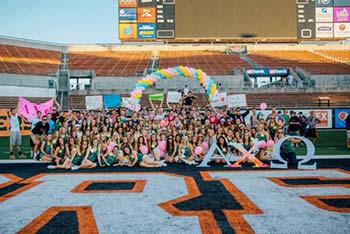 You see, hazing is definitely not taken lightly in the Greek community. I never had to experience anything that was so scary it made me cry and/or feel horrible about myself. No. If I had, I would’ve ran out of there as fast as I could and NEVER looked back! I think hazing is still common among Greeks simply because the policies are so strict, which makes it easy to accidentally participate in hazing even when you never, in a million years, would mean to do it. That’s exactly what happened to my sorority. We thought we were doing something positive, with the hopes of raising our overall GPA, but ended up violating the no-hazing policy. Woops! Personally, I do not encourage, condone, or like hazing in any way, and if I had to guess I would say that the vast majority of Greek life members don’t either. What you can do is trust your judgment and consider my honest advice: give Greek life a chance. I think you will be pleasantly surprised.