The Stress of Moving Into a College Dorm 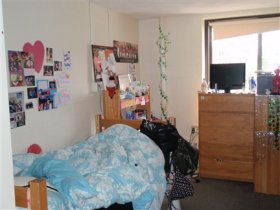 This week I helped move my sister into her college dorm. About four years ago, I did the same for my brother, but it was totally different. Girls have twice as much stuff as boys and God forbid you help them put away their stuff, for fear of discovering ducky boxers. Before we left home, we helped her pack everything from shampoo to Q-Tips, and when we arrived at her dorm, unpacking it all made it seem like we had packed her world and the drugstore. But, little did we know, that was the easy part.

My dad then spent the next five hours fighting with a wireless router and a laptop. The plan was to set her up with the wireless router so that she wouldn’t have to use the computer room. But the best-laid plans…So, after arguing over the phone with the company that makes the wireless router, it ended up being returned to the store and exchanged for a new one that worked after fifteen minutes. We thought we had brought everything she would need until my Mom and I were sitting and looking around thinking, “wow, she needs cereal, Lysol wipes, sponges, bathroom cleaner…” $125.00 later, she had everything she needed.

I have never moved into a dorm, so until now, I did not understand what it was to have to anticipate your needs for the foreseeable future. I experienced it through my sister, and despite all of the chaos, she is just fine, and she is loving her dorm and her roommates. She needed this for her independence and for her life, to move on to bigger and better things. I do have to be honest and say that I’m going through withdrawal. For all the times I hassled her and we fought like cats and dogs, I miss my sister.

So whether you’re moving into an apartment with four of your friends or sharing a dorm with five strangers, it is what you make of it. Do your best to make it the most fun year of your life, compromise when you know you can’t win, and most importantly, just be yourself and have fun.