Gone But Not Forgotten: Remembering 9/11 Through Scholarships 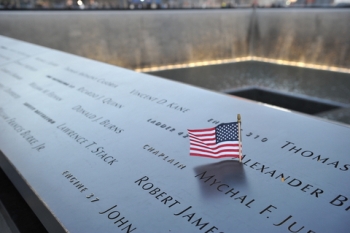 Eleven years ago, I was sitting in my car and stuck in morning traffic. I vividly remember listening to the radio and hearing that a plane had ‘accidentally’ flown into one of the World Trade Center Towers. A few moments later, I walked into the local bowling alley and found everyone hovering around the televisions. No one was moving and their faces were contorted with looks of disbelief and horror. I had assumed a small prop plane had made the mistake of getting too close to the buildings, but I could see from the damage that it was much more serious. As we began debating how a commercial jet could possibly hit one of the towers, another sliced through the other tower. I instantly dropped to my knees and began to sob; it was as if I could hear those innocent souls screaming out for help, but I could do nothing. Our nation was forever changed on September 11, 2001. An estimated 3,051 children lost a parent that day and nearly 20 percent of Americans knew someone killed or hurt in the attacks. For months after the attacks, stories of heroism began to emerge; firemen, police officers, and everyday citizens had made the ultimate sacrifice so others could survive. Numerous foundations and scholarship programs were established, preserving the memories of those lost on that tragic day. And while many of us may never be able to erase those horrific images from our memories, these programs serve as a constant reminder that our nation is strong, we are resilient, and we will never forget those who paid the ultimate price. Here are just a few examples of some of the wonderful programs created to honor those lost on September 11, 2001.

Harry Taback, 56, worked on the 100th floor of the North Tower (1 World Trade Center). After his death, his colleagues collected more than 70 letters from people who knew Harry and placed them in a binder for his family. This $1,000 scholarship is available to college juniors and graduate students who are pursuing a degree in occupational safety and health, or a closely related field, and will carry on Harry’s tradition of protecting others. Deadline: December 1, 2012.

Michael Lynch (Badge # 2315) sacrificed his life along with 342 other firefighters at the World Trade Center on September 11, 2001. His family and friends created a foundation in his honor to help other students pursue their dreams. Children of a New York City firefighter, victims of fires in New York City, victims of the 9/11 attacks, or victims of other disasters may apply for assistance. Deadline: March 1, 2013.

Kathleen ‘Kit’ Faragher worked for the Janus Capital Corporation. Her family and friends describe her as woman full of life, love, and enthusiasm. After her life was cut short on 9/11, her family created this scholarship in her memory. Any Colorado high school senior with a grade point average of 2.5 or higher is eligible to apply for this $5,000 award (paid over two years). Applications will be available in the spring. Next Deadline: May 2013. I hope that everyone takes a few moments this September 11th to reflect on how that fateful day forever changed our lives. Remember those who never had the chance to say goodbye to their loved ones and honor them by cherishing those closest to you. Each day is a gift; don’t waste it. To learn more about available programs and resources for those affected by 9/11, please visit the New York City official website. If you are looking for more 9/11 memorial scholarships, be sure to visit ScholarshipExperts.com or the Families of Freedom Scholarship Fund.