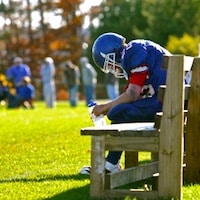 This weekend I was at a large youth soccer facility – the same location I would spend many weekends recruiting while I was a college coach – and it reminded me of a day I walked away from a potential recruit who we valued highly.

As I was walking this weekend I heard a shout from another field (3 fields away actually as the rest where in the process of their half-time break).  The shout from a female, I’ll assume a mom, was “kick the friggin’ ball! KICK THE FRIGGIN’ BALL!”

This incident took me back to a time I was recruiting a highly rated prospect that, in front of numerous college coaches, had a highly charged and expletive argument with her mother. With cursing back-and-forth the emotional toll on the young athlete was so much she took herself out of the game and we, the group of coaches I was with, left the game. I never returned to recruit that player even though she was a highly regarded prospect for us and would have commanded significant scholarship money.

The point of this story is for you to know that coaches are not just recruiting you, the athlete. Your environment and how you interact with your environment are important factors that coaches take into consideration while recruiting. As much as your parents will help you with the recruitment process, they can also hinder it with inappropriate behavior. But, it also goes two ways.

I have known coaches to stop recruiting prospects because of the way he or she spoke to their parents or coaches. I know of one incident at a large ACC school that the coach did not like the way the recruit spoke to her father. His theory was if she could not show respect to her father in front of other adults what chance would he have as her coach. The answer: probably very little!

During your recruitment process you are being evaluated as a representative of the institution you will attend. How you interact with your parents, siblings, teammates, coaches and opponents will paint a very lucid picture of you.  It is your job, with the help of those around you, to been seen in the best possible light so you will be seen to represent your program and institution well.

It is your job, during the recruitment process, to make sure your interactions with everyone involved in your life are treated with respect – and that this respect is reciprocated.