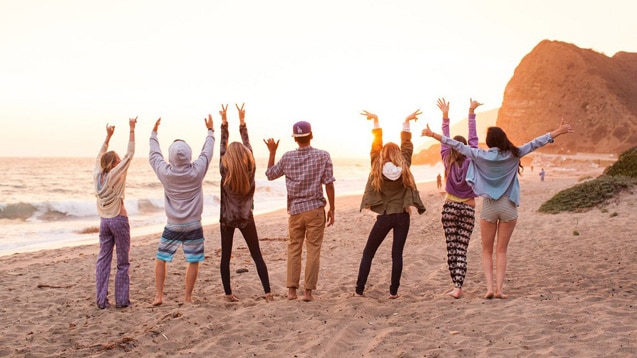 By Paris Close In college, summer break was a way to escape the choke-hold of reality: exams, all-nighters, and the shady looks I received from the lacrosse guys I shared a floor with. Many of my college summers were more productive than fun, due to the fact that I wanted my dorm to look more like something out of a Teen Vogue spread than a correctional facility. So I toiled away over hot grills, in even hotter kitchens, to earn enough money to make it happen. But by the time I finally made enough, my summer break was nearly over. There are some things I wish had been different. I could’ve taken advantage of more opportunities during my summer breaks. So in the words of Ariana Grande, if I had one last time, here are three things I would have done differently.

The worst thing about summer breaks was having to pack up my things and head back home. Not because I was dreading carrying a mini-fridge down three flights of stairs, but because I actually hated my hometown. There, I said it. There is very little to do back home, and it was a mistake not to have found an on-campus job that would’ve allowed me to stay in Grand Rapids with my friends over break. I think living on campus would’ve allowed me to get the full experience of the city and all it had to offer without the pressure and commitment of schoolwork.

Ha ha! I know what you’re thinking, “Paris, what does this have to do with anything?!” Let’s be clear on one thing: I’m not saying that I was unhappy being single all those summers. I was able to focus on making money, the upcoming school year, and exercise (or whatever) — things that I found more important at the time. But looking back on it, I think I closed myself off to even the idea of dating someone. It isn’t very often that someone associates dating with their professional ventures, but hear me out. I wasn’t so much interested in getting a Facebook-official boyfriend out of the dating experience, but more so the socializing aspect of it. I love my small circle of friends, but I wish I’d gotten out there more and developed relationships with even more classmates and peers.

With all the macaroni-scooping I was doing, I barely had enough time to record what was going on in my everyday life. Still, I think if I had forced myself to churn out entries on an everyday basis, it would have prepared me for the work I do now, seeing as my employability is largely contingent upon how fast I can produce material. I can also appreciate the therapeutic value of blogging. In fact, a classmate of mine, Rachael Steil, runs a very successful blog called Running in Silence, which chronicles her experiences as a runner. It’s so intimate and raw and vulnerable, and one of my many inspirations for getting back into blogging again today. We get so caught up in the idea of summer breaks that we overlook the productive things we could be doing to make positive changes in our lives. What matters most, though, are the strides we take to make those goals and aspirations our reality today, always keeping in mind that it’s never too late to accomplish our goals.

Paris Close earned his bachelor’s degree in English from Aquinas College in 2014, where he worked as an editor for the college’s newspaper for three years. He is all too familiar with the horrors of final exams, almost being hit by flying lacrosse balls, and making friends with the snooze button. Paris’s leading obsessions are Jack Falahee and Jack Falahee’s face and beard, respectively.